Thora Johnson was a Lady with a vision. She recognized the plight of elderly Swedes living in the Lower Mainland, many of whom lived in deplorable conditions. In February 1945, she invited members of the Swedish community to a meeting in her home to discuss building a Rest Home for elderly people of Swedish descent. A building fund was established, collecting $12.59 that evening. Thora Johnson was elected President of the Rest Home committee at the second meeting and worked with volunteers to raise money through crafts, sewing and knitting, teas, dinners, raffles, bazaars, carnivals, etc. 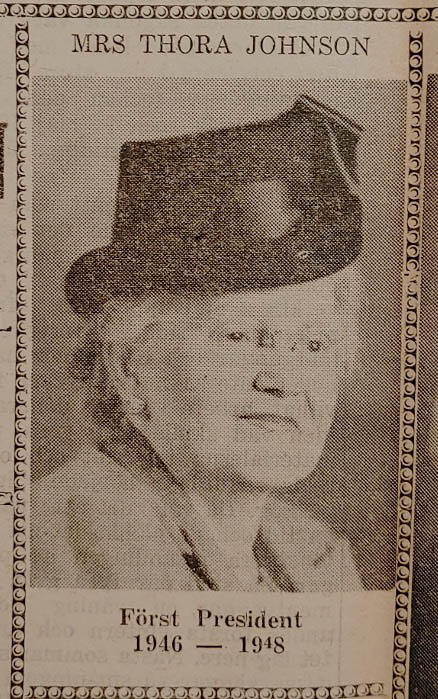 By 1946 the Rest Home committee had raised enough money to buy twelve lots for $840.00 on Cutter Island, close to Swedish Park, in North Vancouver. The volunteers cleared the heavily timbered lots and built a cottage, where the ladies auxiliary, Sunset Circle, cooked and served them hot meals. With great foresight for 1946, the Rest Home Association planned to buy land around the site and build cottages for married couples. 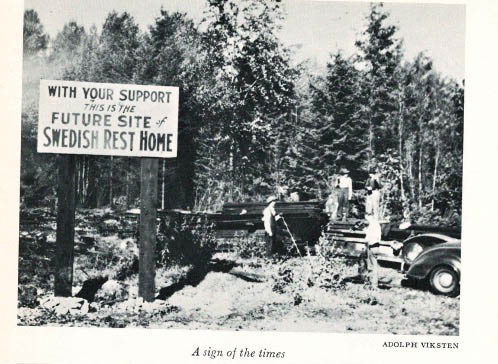 In the latter part of August 1947, the cornerstone was laid. Bricklayer Swan Carlson led the construction work while George Carlson worked at his side, together with many other Swedish volunteers. Slowly they started building with materials acquired cheaply but some donated from local firms with both Swedish and non-Swedish connections. After working their regular jobs, these volunteers would take their hammers, paintbrushes, other tools and make their way to work on the Rest Home. 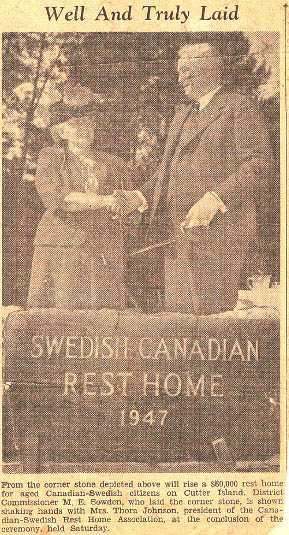 M. E. Snowden and Thora Johnson at the Cornerstone Celebration for the First Rest Home, 1947

Much thought went into the design. A ramp instead of a staircase was built from the basement to the top floor, which is easier for elderly people. On all floors there were washrooms for both sexes and a steam bath in the basement. The building was made of concrete, providing fireproof and soundproof walls between rooms and washrooms. Two Swedes, John Rylander and John Noreus, travelled to logging camps up the coast and returned with donations of $5000.00. In the winter of 1948 work stopped, as there were too many bills to pay and no more money. Fundraising went on until they felt they had exhausted all their sources. Amanda Shaw, a volunteer declared, “I will finish the Rest Home.” She put up $40,000. some of which was a donation, but mostly was a loan. Many Swedes donated the furniture for the rooms. With many financial obstacles along the way, their determination and hard work overcame the difficulties. The 50 bed Rest Home was officially opened on May 15, 1949. There were dignitaries from the provincial government, the City, and Swedish Consul Karl Axel Ståhl. Several hundred Swedish Canadians were in attendance. Everybody was exuberant, as a goal had been reached, which at many times did not seem possible. Their dream had been fulfilled. 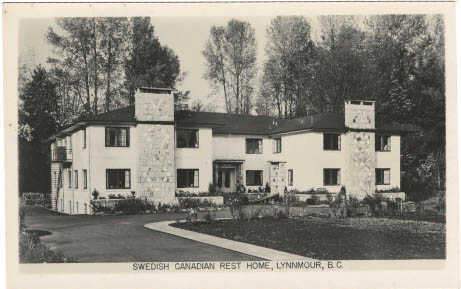 The Swedish Rest Home celebrated its 5th anniversary in May 1954 with a big party where they burnt the mortgage papers, as the mortgage was paid off. The Swedish Consul Karl Axel Ståhl presented them with a Swedish Flag as a gift from the Swedish King. At the time of the construction of the Iron Workers’ Memorial Second Narrows Bridge, the Rest Home was virtually cut off by highway cloverleafs. It was deemed that the location was not good for the Residents in the Swedish Rest Home any longer and the property was expropriated by the provincial government.

Harold Swanson located a 5-acre garden nursery that was for sale in Burnaby on Duthie Avenue. This was purchased in 1956. Construction got quickly under way as this new venture was led by several Swedish businessmen. The New Swedish Rest Home could receive 80 occupants, when it stood ready in 1957. November 2, 1957 is regarded as an important occasion in the Swedish Community: Moving Day. Everything that could be moved ahead of time, was. The Swedish Community came out in force– 80 volunteers, who in one day moved the Residents in private cars, some on loan. Everything else was also transported from Cutter Island to Burnaby. The Board members had organized this big undertaking led by President Gunnar Axelson.

The New Swedish Canadian Rest Home Board members waited until next year, August 16, 1958 to have the official opening celebration. Some beautiful landscaping was done and many things finished off.

The Swedish Canadian Rest Home was renowned for its well-planned facility and many came to tour it.

In 1966 H.R.H. Prince Bertil from Sweden toured the facility and was very impressed. He declared this was the nicest Rest Home he had ever seen. 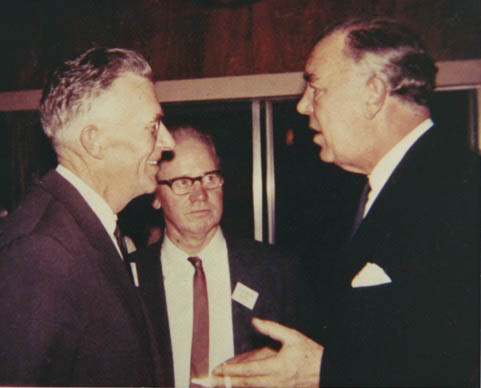 May 20, 1967 saw the Official Opening of an extension to the Swedish Canadian Rest Home. The Rest Home could now accept 114 residents. 20 single rooms and 8 two-room apartments had been built. An auditorium had been added to the lower floor. The Official Opening was attended by many of Swedish descent. John Leander was MC. The Greeting s of Welcome was spoken by Tom Carlson, President. Many dignitaries from all levels of government attended the Opening and expressed their congratulations. The Swedish Ambassador Per Lind, stationed in Ottawa, delivered many accolades about this beautiful Home. The First President Thora Johnson expressed her happiness over the success following the poor and difficult beginnings 20 years earlier. 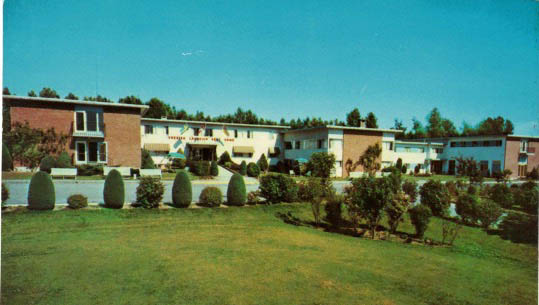 In 1967 the Association also built, at the same site, the Swedish Canadian Manor– 63 self-contained units for low-income adults over 55.

In 1978 Olof Palme visited the Swedish Canadian Rest Home, where he spent some time with the Residents. John Leander was the contact person, as they had met several times before. 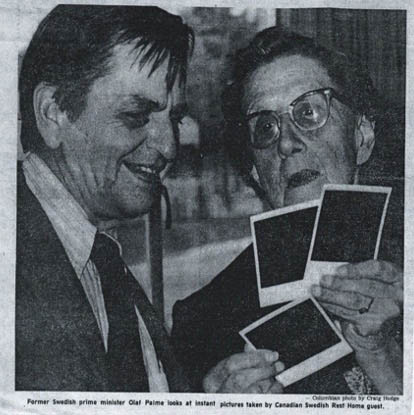 On March 18, 1988, the King and Queen of Sweden visited the Swedish Canadian Rest Home. H.R.H. King Carl XVI Gustaf presented Evelyn Leander, The Gold Medal of the Royal Order of the Polar Star, which was granted posthumously to her husband John Leander. John Leander had contributed a lot to the Swedish Canadian community, particularly in preserving the Swedish Home. He served in many responsible positions within the administration and operation. He was also an active member of several Swedish Canadian organizations in Greater Vancouver. 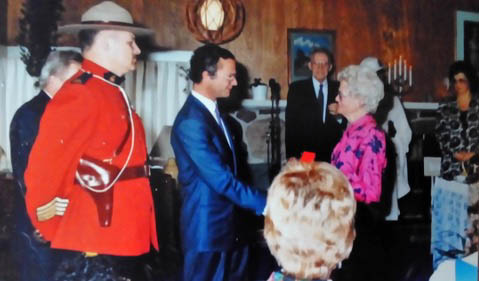 H.R.H. King Carl XVI Gustaf Presents the Gold Medal of the Royal Order of the Polar Star to Evelyn Leander, 1988

The Rest Home had some financial difficulties in the 1980’s ending up in the red. The cost of taking care of the elderly was on the rise. This was especially true of the intermediate care area. The Board managed to turn it around through reorganization and hard work.

In 1991, completion of Gustav Vasa Place was delayed as there was a shortage of supplies. They had oversubscribed the 80 one-bedroom units of subsidized housing for 55 and over. The official opening of Gustav Vasa Place took place on April 5, 1992 with many dignitaries honoring the occasion with commendations and appreciation. It was also proclaimed that the site would be called the Swedish Canadian Village. The sod was going to be turned as well for the Valhalla Court construction. The Ladies Auxiliary had made up some great sandwiches in Gustav Vasa Place, so everybody rushed into the building to enjoy the offerings. No sod turning that day.

Rising costs and changes in provincial health programs brought about the closing of the Swedish Canadian Rest Home in 1995.

After much work and many difficulties, the Board of Directors started the construction of Swedish Assisted Living Residence– 64 one-bedroom units, 46 of which are subsidized by Fraser Health and BC Housing, and 18 private units. This building opened in March 2012.

Started by the Swedish Canadian community in the 1940’s, and continuing on to the present time by the many volunteers and sacrifices of this community and others, Swedish Canadian Village continues to this day to provide Assisted Living and Subsidized Housing to many residents of Greater Vancouver of all nationalities. 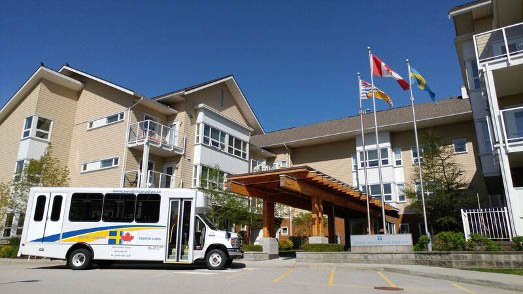 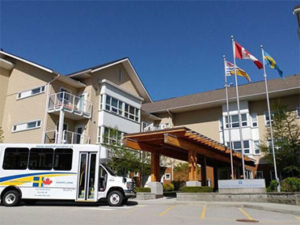 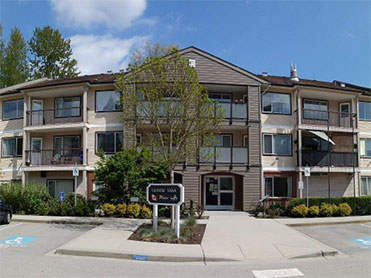 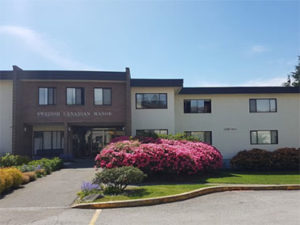